Dinopedia
Register
Don't have an account?
Sign In
Advertisement
in: Dinosaurs of North America, Ankylosauridae, Fossil taxa described in 2017,
and 13 more

Borealopelta (meaning "Northern shield") is a genus of nodosaurid ankylosaur from the Early Cretaceous of Alberta, Canada. It contains a single species, B. markmitchelli, named in 2017 by Caleb Brown and colleagues from a well-preserved specimen known as the Suncor nodosaur. Discovered at an oil sands mine north of Fort McMurray, Alberta, that is owned by the Suncor Energy company, the specimen is remarkable for being among the best preserved dinosaur fossils of its size ever found. It preserved not only the armor (osteoderms) in their life positions, but also remains of their keratin sheaths and overlying skin. Melanosomes were also found that indicate a countershaded reddish skin tone.

The Suncor Borealopelta is remarkable for its three-dimensional preservation of a large, articulated dinosaur complete with soft tissue. While many small dinosaurs have been preserved with traces of soft tissues and skin, these are usually flattened and compressed during fossilization. Similar-looking hadrosaurid "mummies" have a shriveled, desiccated appearance due to their partial mummification prior to fossilization. The Suncor specimen, however, appears to have sunk upside-down onto the sea floor shortly after its death, causing the top half of the body to be quickly buried with minimal distortion. The result is a specimen that preserves the animal almost as it would have looked in life, without flattening or shriveling.[1][2]

The Suncor specimen preserved numerous closely spaced rows of small armor plates, or osteoderms, lining the top and sides of its broad body. From the shoulders protruded a pair of long spines, shaped like the horns of a bull. Study of the pigments present in remnants of skin and scales suggest that it might have had a reddish-brown coloration in life, with a countershaded pattern that was used for camouflage.[2] The discovery that Borealopelta possessed camouflage coloration indicates that it was under threat of predation, despite its large size, and that the armor on its back was primarily used for defensive rather than display purposes.[1]

The Suncor Borealopelta was preserved in the marine sandstones and shales of the Wabiskaw Member of the Clearwater Formation, which were laid down during the Albian stage of the Early Cretaceous period, about 110 - 112 million years ago.[1] At that time, the region was covered by the Western Interior Seaway, an inland sea that stretched from the Arctic Ocean to the Gulf of Mexico,[2][3] and the Wabiskaw sediments were being deposited in an offshore marine environment.[1]

The Borealopelta must have been washed out to sea, perhaps during a flood. The bloated carcass floated, possibly for weeks, until it burst and sank.[2] It landed on the seabed on its back with enough force to deform the immediately underlying sediments. About 15 centimeters (6 inches) of sediment settled over the carcass prior to the release of body fluids, as evidenced by fluid-escape structures preserved in the sediments, and the body cavity became filled with sand. A siderite concretion began to form around the carcass shortly after its arrival in the seabed, which prevented scavenging and preserved the body intact, with its scales and osteoderms in their original configuration.[1]

The Suncor Borealopelta was uncovered at the Millennium Mine, an oil sands mine 30 kilometres (19 mi) north of Fort McMurray, Alberta, that is owned and operated by Suncor Energy.[4] The Wabiskaw Member sediments were being removed to allow mining of the underlying bitumen-rich sands of the McMurray Formation when, at about 1:30pm local time on March 21, 2011, an excavator being operated by Suncor employee Shawn Funk struck the fossil. The unusual nature of the exposed fragments was immediately recognized by Funk, and his supervisor Mike Gratton notified the Royal Tyrrell Museum of Palaeontology. In accordance with Suncor's mining permit, the specimen became the property of the Albertan government.[4]

On March 23rd, Royal Tyrrell Museum scientist Donald Henderson and senior technician Darren Tanke were brought to the mine on a Suncor jet to examine the specimen, which, based on photographs, they expected to be a plesiosaur or other marine reptile, as no land animals had ever been discovered in the oil sands previously.[4] Upon correct identification, which was made on site by Tanke, Henderson was astonished to learn that it was an ankylosaurian dinosaur and not a marine reptile. The animal had apparently been washed out to sea after death. [5]

After three days of mine safety training, museum staff and Suncor employees began working to recover all pieces of the fossil. Aside from the several pieces broken free by Funk's excavator, the bulk of the specimen was still embedded 8 meters up a cliff that was 12 meters high. The process took fourteen days in total.[4]

As the major piece of rock containing the fossil was being lifted out, it broke under its own weight into several pieces. Museum staff salvaged the specimen by wrapping and stabilizing the pieces in plaster, after which they were able to successfully transport them to the Royal Tyrell Museum. There, technician Mark Mitchell spent five years removing the adhering rock and preparing the fossil for study, which was sponsored by the National Geographic Society. The species B. markmitchelli was named for him in recognition of his skilled work.[4][2][6] The specimen was put on public exhibit on May 12, 2017, as part of the Royal Tyrrell Museum's "Grounds for Discovery" exhibition, along with other specimens discovered via industrial activity.[6] 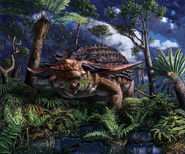 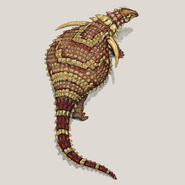 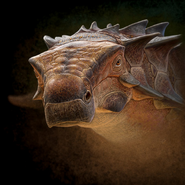