B. latifrons reached a shoulder height of 2.5 meters (8.2 feet) and may have weighed over 2,000 kilograms (4,400 lb). It competes with the "giant Africa buffalo" Pelorovis for the title of largest bovid, and even largest ruminant ever to live, possibly outweighing the extant African giraffe (Giraffa camelopardis). The horns of B. latifrons measured as great as 213 centimeters (84 in) from tip to tip, compared with only 66 centimeters (26 in) in modern Bison bison. The known dimensions of the species are much larger than any extant bovid, including both extant species of bison — the American bison and the European bison. Based on a comparison of limb bones between B. latifrons and B. bison, the mass of the former is estimated to have been 25%–50% greater than that of the latter. In fact, B. latifrons is possibly the largest bovid in the fossil record. 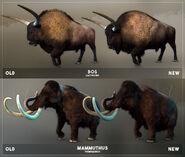 Add a photo to this gallery
Retrieved from "https://dinopedia.fandom.com/wiki/Bison_latifrons?oldid=141129"
Community content is available under CC-BY-SA unless otherwise noted.