Dinopedia
Register
Don't have an account?
Sign In
Advertisement
in: Dinosaur, Sauropods, Fossil taxa described in 2019,
and 18 more

Bajadasaurus ("downhill lizard") is a genus of sauropod from the Early Cretaceous Bajada Colorada Formation of Argentina. Bajadasaurus is distinct due to the extremely long neural spines, similar to those of its close relative Amargasaurus, that extend from its neck vertebrae. These spines curved forward over the animal's neck, resulting in the dinosaur's species name, pronuspinax, meaning "forward curving spine."

Bajadasaurus was recovered from the Bajada formation, a geological formation in the Mendoza group which is exposed in Northern Pangea. This formation is composed of red, green-brown sandstones, and conglomerates of fine to coarse grain size together with bands of reddish claystones and light brown siltstones, these sediments were mostly deposited by braided rivers, as is evident by well-preserved river channels with cross bedding. Paleosols are also present in the formation. The Bajada Colorada Formation overlies the Quintuco and Picún Leufú Formations, it is separated from the overlying Agrio Formation by an unconformity (sedimentation hiatus) at its top. Bajadasaurus stems from the Bajada Colorada locality, the type locality of the formation. The locality yielded the remains of another sauropod, the diplodocid Leinkupal laticauda, as well as those of several unknown theropod species that can be ascribed to basal Tetanurae and possibly to abelisauroids and deinonychosaurians. 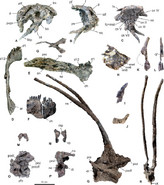 An artist's restoration of Bajadasaurus 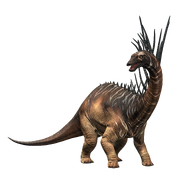