The Aurochs (also known as urus or Bos primigenius), were the ancestors of domestic cattle, was a type of large wild cattle which inhabited Europe, Asia and North Africa, but is now unfortunately extinct; it survived in Europe until 1627.

Auroc bulls are believed to have reached a height of 1.8 meters (5 feet 10 inches) at the withers, and the cows to have been about 1.5 meters (4 feet 11 inches), displaying considerable sexual dimorphism.

The aurochs was regarded as a challenging hunting quarry animal, contributing to its extinction. The last recorded aurochs, a female, died in 1627 in the Jaktorów Forest,Poland, and her skull is now the property of the Livrustkammaren ("Royal Armoury") museum in Stockholm, Sweden.

Representations and descriptions of aurochs appear in prehistoric cave paintings, in Julius Caesar's The Gallic War, and as the national symbol of many European countries, states and cities such as Alba-lulia, Kaunas, Romania, Moldavia, Turka, Mecklenburg, and Uri. The Swiss canton Uri was named after this animal species. Domestication of bovines occurred in several parts of the world but at roughly the same time, about 8,000 years ago, possibly all derived from the aurochs. In 1920, the Heck brothers, who were German biologists, attempted to recreate aurochs. The resulting cattle are known as Heck Cattle or Reconstructed Aurochs, and number in the thousands in Europe today. However, they are genetically and physiologically distinct from aurochs. The Heck brothers' aurochs also have a pale yellow dorsal stripe, instead of white.

According to the Paleontologisk Museum, at the University of Oslo, aurochs evolved in India some two million years ago, migrated into the Middle East and further into Asia, and reached Europe about 250,000 years ago. They were once considered a distinct species from modern European cattle (Bos taurus), but more recent taxonomy has rejected this distinction. The South Asian domestic cattle, or zebu, descended from a different group of aurochs at the edge of the Thar Desert; this would explain the zebu's resistance to drought. Domestic yak, gayal and Javan Cattle do not descend from aurochs. Modern cattle have become much smaller than their wild forebears. Aurochs were about 1.75 metres (5 feet 9 inches) tall, while a very large domesticated cow is about 1.5 metres (4 feet 11 inches) and most domestic cattle are much smaller than this.

Aurochs also had several features rarely seen in modern cattle, such as lyre-shaped horns set at a forward angle, a pale stripe down the spine, and sexual dimorphism of coat color. Males were black with a pale eel stripe or finching down the spine, while females and calves were reddish (these colours are still found in a few domesticated cattle breeds, such as Jersey Cattle). Aurochs were also known to have very aggressive temperaments and killing one was seen as a great act of courage in ancient cultures.

Sometimes it seems that every contemporary animal had a plus-sized megafauna ancestor during the Pleistocene epoch. A good example is the Auroch, which was pretty much identical to modern oxen with the exception of its size: this "dino-cow" weighed about a ton, and one imagines that the males of the species were significantly more aggressive than modern bulls. (Technically, the Auroch is known as Bos primigenius, placing it under the same genus umbrella as modern cattle, to which it's directly ancestral.)

The Auroch is one of the few prehistoric animals to be commemorated in ancient cave paintings, including a famous drawing from Lascaux in France. As you might expect, this mighty beast figured on the dinner menu of early humans, who played a large part in driving the Auroch into extinction. However, small, dwindling populations of Aurochs survived well into modern times, the last known individual dying in 1627.

Back in the 1920's, a pair of German zoo directors hatched a scheme to resurrect the Auroch via selective breeding of modern cattle (which share virtually the same genetic material, albeit with some important traits suppressed). The result was a breed of oversized oxen known as Heck cattle, which, if not technically Aurochs, at least provide a clue to what these ancient beasts must have looked like. 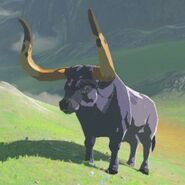 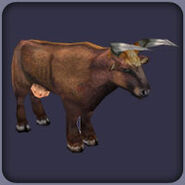 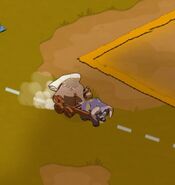 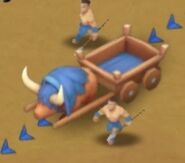 Add a photo to this gallery
Retrieved from "https://dinopedia.fandom.com/wiki/Aurochs?oldid=149097"
Community content is available under CC-BY-SA unless otherwise noted.