Atopodentatus unicus ("strange toothed") is an aquatic reptile from the Middle Triassic around 247-242 million years ago. It has a shocking appearance because of his mouth. It was originally believed to have a mouth that went straight up its head, but recent fossils have revealed that the mouth actually went horizontally, like a vacuum cleaner. It is believed to have fed by sucking vegetation from the sea floor, just like Henodus.

The genus name Atopodentatus is derived from the Ancient Greek atopos, meaning "unusual", combined with Latin dentatus, "toothed", referring to the unusual arrangement and shape of the teeth. 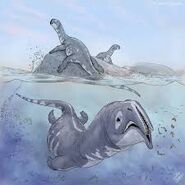 An outdated reconstruction of the jaws of Atopodentatus.

Retrieved from "https://dinopedia.fandom.com/wiki/Atopodentatus?oldid=140519"
Community content is available under CC-BY-SA unless otherwise noted.