Arsinoitherium is an extinct genus of paenungulate mammal related to elephants, sirenians, hyraxes and the extinct desmostylians, as well as to other extinct embrithopods. These species were rhinoceros-like herbivores that lived during the late Eocene and the early Oligocene of northern Africa from 36 to 30 million years ago, in areas of tropical rainforest and at the margin of mangrove swamps; a newly discovered species, Arsinoitherium giganteum, lived in Ethiopia ~27 million years ago.

When alive, it would have superficially resembled a rhinoceros, and have been about 1.8 metres (5.9 ft) tall at the shoulders, and 3 metres (9.8 ft) long. The most noticeable feature of Arsinoitherium was a pair of enormous knife-like horns with cores of solid bone that projected from above the nose, and a second pair of tiny, knob-like horns on top of the head, immediately behind the larger horns. The skeleton is robust but shows that it was descended from a cursorial ancestor, and that the beast may have been able to run if it had to, like a modern elephant or rhinoceros. Its limb bones also suggest that the columnar legs of the living animal were elephant-like (especially since they ended in five-toed feet), rather than rhinoceros-like. Arsinoitherium had a full complement of 44 teeth, which is the primitive state of placental mammalian dentition, suggesting that it was a selective browser. The large size and hefty build of Arsinoitherium would have rendered it largely immune to predation. However, creodonts may have preyed on the young or infirm.

Arsinoitherium's most distinctive feature was the two large horns on their snouts. The horns were hollow and possibly used to produce loud mating calls as well as to compete with rival males. Arsinoitherium was a hefty creature with thick, hairless skin resembling elephant hide. Arsinoitherium was very selective in the types of fruit and leaves it ate. Its size meant it had to eat a lot of food - it probably spent much of its day chewing on something. Arsinoitherium lived in small groups and would have been in the water most of the time. It couldn't straighten its legs, suggesting they were better for wading and swimming than for walking. Its large size kept it safe from most predators, although creodonts might tackle a young Arsinoitherium.

The name derives from Arsinoë, a Ptolemaic Egyptian queen whose palace was near the site of discovery. While this was the only site where complete skeletons of Arsinoitherium fossils were recovered, remnants of earlier relatives have been found in south-eastern Europe and Mongolia, in the form of jaw fragments. These earlier arsinoitheres have yet to be formally described. The best known (and first described) species is A. zitteli. A second species, A. giganteum, was discovered in the Ethiopian highlands of Chilga in 2003. The fossil teeth, far larger than those of A. zitteli, date back to around 28-27 million years ago The Mongolian material has been named Radinskya yupingae, while the European material has been given the nomen dubium of Crivadiatherium iliescui, and the Turkish material has been named Palaeoamasia kansui (also nomen dubium). 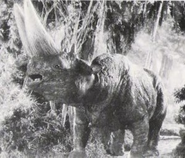 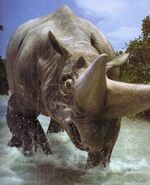 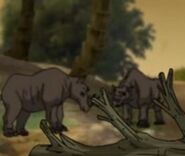 As seen in the Macmillan Illustrated Encyclopedia of Dinosaurs 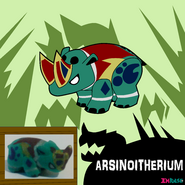 Retrieved from "https://dinopedia.fandom.com/wiki/Arsinoitherium?oldid=152197"
Community content is available under CC-BY-SA unless otherwise noted.