Anurognathus is a genus of small pterosaur that lived approximately 155-140 million years ago during the late Jurassic Period (Tithonian stage). It had a short head with pin-like teeth for catching insects and although it traditionally is ascribed to the long tailed pterosaur group (Rhamphorhynchoidea), its tail was comparatively short, allowing it more maneuverability for hunting.[1] The reduced tail of Anurognathus was similar to the pygostyle of modern birds.[2] Its more typical rhamphorhynchoid characters include its elongated fifth toe and short neck.[2] With a wingspan of 50 cm (20 inches) and a 9 cm long body (skull included), it probably weighed no more than a few grams. Only two skeletons have been found, in the Solnhofen limestone of Bavaria. Anurognathus was first named and described by L. Döderlein in 1923.[3]

The genus name Anurognathus is derived from the Greek αν/an- ("without"), оυρα/oura ("tail"), and γναθος/gnathos ("jaw") in reference to its unusually small tail relative to other rhamphorhynchoids pterosaurs. The species name A. ammoni honours the Bavarian geologist Ludwig von Ammon.[2] Anurognathus was a member of the family or clade Anurognathidae. 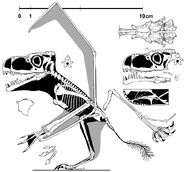 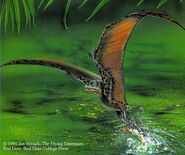 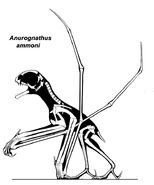 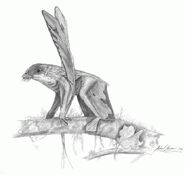 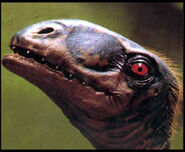 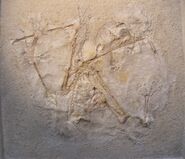 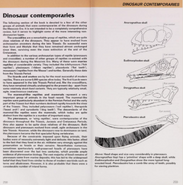 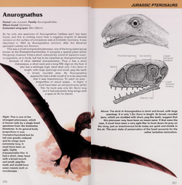