Anhanguera is a genus of pterodactyloid pterosaur known from the Early Cretaceous Romualdo Formation of Brazil. This pterosaur is closely related to Ornithocheirus but belongs in the family ornithocheiridae.

The generic name comes from the tupi words añanga, meaning "spirit protector of the animals".

Anhanguera was a fish-eating animal with a wingspan of about 4.6 meters (15 feet).

There are two species of Anhanguera: A. blittersdorfi, the type species; and A. piscatory. A. blittersdorfi is based on a complete skull from the Romualdo Formation calcareous concretions (Santana Group) of the Ceará and Pernambuco states of Brazil.[1][2][3][7] The species A. piscator, known from a nearly-complete skeleton, was at one point proposed to belong to the genus Coloborhynchus,[8] but has more recently been placed back into Anhanguera by Andres and Myers.[9] Also known from a complete skeleton is A. spielbergi, which was also originally considered a species of Coloborhynchus, but it is currently placed as a species of Maaradactylus. 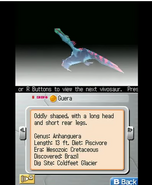 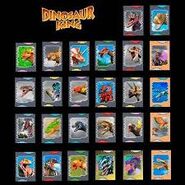 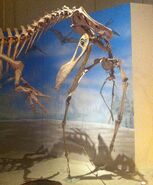 Add a photo to this gallery
Retrieved from "https://dinopedia.fandom.com/wiki/Anhanguera?oldid=167525"
Community content is available under CC-BY-SA unless otherwise noted.