Angaturama (AHN-gah-too-RAH-ma - (Tupi Indian) angaturama meaning "noble, brave") is a dubious/uncertain genus of spinosaurid theropod from the Early Cretaceous Santana Formation of northeastern Brazil. The type specimen was discovered in a limestone nodule and consisted of the incomplete anterior portion of a skull. A description of the new species, A. limai by Alexander W.A. Kellner and Diogenes de A. Campos was published in February 1996. It was named after Angaturama, a protective spirit in the aboriginal Tupi Indian culture of Brazil, and paleontologist Murilo R. de Lima, who informed Kellner of the specimen in 1991. Later research uncovered 60% of the complete skeleton, allowing a replica to be made and mounted for an exhibit at the Federal University-owned Rio de Janeiro National Museum.[1]

Angaturama was diagnosed by the very strong lateral compression of the snout, and a thin sagittal crest (shape unknown) on top of the premaxillae. A pterosaur fossil was found with an Angaturama tooth embedded in it, pointing to possible predation. 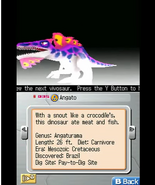 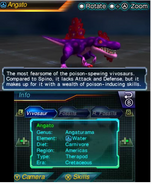 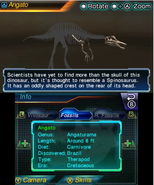 Retrieved from "https://dinopedia.fandom.com/wiki/Angaturama?oldid=178189"
Community content is available under CC-BY-SA unless otherwise noted.