Andrewasarchus was the largest meat eating land mammal known to have ever existed. It lived in East Asia. No complete skeleton has been ever found—only its skull, which measured 33 inches long. Paleontologists have built up an impression of the rest of the animal's body from knowledge of its skull, and its relation to the bearlike, Mesonyx. If their impression is correct, Andrewsarchus was 6 feet high and 16 feet long. It had long, strong, jaws which it used to eat a variety of foods. It would have weighed about 800 kg, with a guess to be able to possibly exceed that range and perhaps over 1000 kg. Andrewsarchus was a scavenger and an omnivore, it would eat anything. It belonged to a group of carnivorus hoofed mammals called mesonychids. Fossil hunters have found most mesonychid remains near rivers and coasts, suggesting that this was where they lived and hunted.

It is interesting that this creature belongs to ungulates, from which hippos and cetaceans (whales) evolved, and it was probably related to modern-day hippos due to its rather "chubby" build, and weird feet.

The only known was found at a locality in the lower levels of the middle Eocene Irdin Manha Formation of Inner Mongolia, by the paleontological assistant Kan Chuen Pao during the spring of the second year (1923) of the Central Asiatic Expeditions (CAE) of the AMNH, led by the explorer and naturalist Roy Chapman Andrews, famed paleontologist and adventurer of the Velociraptor as well.

Andrewsarchus appeared in the second episode of Walking with Beasts Where one is seen on a beach killing and eating a sea turtle, and two tried to steal a mother Embolotherium’s dead calf.

It is also in Jurassic Park Builder as a limited carnivore in the Glacier park.

Andrewsarchus can be created in the Cenozoic park in Jurassic World: The Game.

Andrewsarchus was also added in the mobile game Jurassic World Alive as a Rare Cenozoic creature. 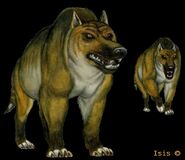 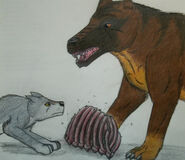 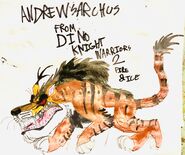 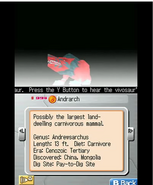 Add a photo to this gallery
Retrieved from "https://dinopedia.fandom.com/wiki/Andrewsarchus?oldid=176715"
Community content is available under CC-BY-SA unless otherwise noted.