Dinopedia
Register
Don't have an account?
Sign In
Advertisement
in: Small Carnivores, Jurassic dinosaurs, Dinosaurs of Asia,
and 20 more

Anchiornis (meanibg "Near bird") was a small troodontid dinosaur that is the missing link between dinosaurs and birds. Scientists have learned its colouration due to fossil feathers.

The genus Anchiornis contains the Type Species Anchiornis huxleyi, named in honor of Thomas Huxly, an early proponent of biological Evolution, and the first to propose a close evolutionary relationship between birds and dinosaurs. The generic name Anchiornis means "near bird", and its describers cited it as important in filling a gap in the transition between the body plans of Avian birds and non-avian dinosaurs.

Anchiornis huxleyi was a small, paravian dinosaur with a triangular skull bearing several details in common with dromaeosaurids and troodontids. Anchiornis had very long legs, usually an indication that they were strong runners. However, the extensive leg feathers indicate that this may be a vestigial trait, as running animals tend to have reduced, not increased, hair or feathers on their legs. The forelimbs of Anchiornis were also very long, similar to archaeopterygids.

The first fossil was recovered from the Yaolugou locality, Jianchang County, western Liaoning, China; the second, at the Daxishan locality of the same area. The deposits are lake sediment, and are of uncertain age. Radiological measurements indicate an early Late Jurassic age for them, between 161 and 151 million years ago.

While the first specimen of Anchiornis preserved only faint traces of feathers around the preserved portion of the body, the well-preserved second specimen showed nearly complete feather preservation, allowing researchers to identify the structure of the feathers and how they were distributed.

As in other early paravians such as Microraptor, Anchiornis had large wings, made up of pennaceous flight feathers attached to the arm and hand (as in modern birds) as well as flight feathers on the hind legs, forming an arrangement of fore and hind wings. The forewing of Anchiornis was composed of 11 primary feathers and 10 secondary feathers. Unlike Microraptor, the primary feathers in Anchiornis were about as long as the secondaries and formed a more rounded wing, with curved but symmetrical central vanes, a small and thin relative size, and rounded tips, all indicating poorer aerodynamic ability compared to its later relative. In Microraptor and Archaeopteryx, the longest forewing feathers were closest to the tip of the wing, making the wings appear long, narrow, and pointed. However, in Anchiornis, the longest wing feathers anchored near the wrist, making the wing broadest in the middle and tapering near the tip for a more rounded, less flight-adapted profile.

The hind wings of Anchiornis were also shorter than those of Microraptor, and were made up of 12–13 flight feathers anchored to the tibia (lower leg) and 10–11 to the metatarsus (upper foot). Also unlike Microraptor, the hind wing feathers were longest closer to the body, with the foot feathers being short and directed downward, almost perpendicular to the foot bones.

Unlike any other known Mesozoic dinosaur, the feet of Anchiornis (except for the claws) were completely covered in feathers (much shorter than the ones making up the hind wing).

In 2010, a team of scientists examined numerous points among the feathers of an extremely well preserved Anchiornis specimen to survey the distribution of melanosomes, the pigment cells that give feathers their color. By studying the types of melanosomes and comparing them with those of modern birds, the scientists were able to map the specific colors and patterning present on Anchiornis when it was alive. Though this technique had been used and described for isolated bird feathers and portions of other dinosaurs (such as the tail of Sinosauropteryx), Anchiornis became the first Mesozoic dinosaur for which almost the entire life coloration was known (note that the tail of this specimen was not preserved).

Most of the body feathers of Anchiornis were gray and black. The crown of head feathers was mainly rufous with a gray base and front, and the face had rufous speckles among predominantly black head feathers. The fore and hind wing feathers were white with black tips. The coverts (shorter feathers covering the bases of the long wing feathers) were gray, contrasting the mainly white main wings. The larger coverts of the wing were also white with gray or black tips, forming rows of darker dots along mid-wing. These took the form of dark stripes or even rows of dots on the outer wing (primary feather coverts) but a more uneven array of speckles on the inner wing (secondary coverts). The shanks of the legs were gray other than the long hind wing feathers, and the feet and toes were black. 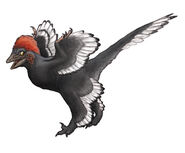 An anchiornis feeds its offspring(Art by Emily Willoughby)