Dinopedia
Register
Don't have an account?
Sign In
Advertisement
in: Cretaceous dinosaurs, Dinosaurs of South America, Herbivores,
and 48 more

Amargasaurus was a Diplodocoid which lived in the Early Cretaceous. It was small for a sauropod, reaching 10 meters (33 feet) length. It would have been a quadrupedal herbivore with a long, low skull on the end of a long neck. However, this dinosaur sported two parallel rows of tall spines down its neck and back, taller than in any other known sauropod. These spines have been reconstructed supporting skin sails, but the "skin sail" hypothesis was rejected by Gregory S. Paul in 2000.

The neck bones of Amargasaurus had bony spines that may have formed a spiky crest.

Amargasaurus was small for a sauropod, measuring 9 to 10 meters in length and weighing approximately 2,6 tones. The neck of Amargasaurus, measuring 2.4 meters in length, was proportionally short for sauropod standards.The trunk was made out of 9 dorsal and probably 5 fused sacral vertebrae.While the foremost dorsals were opisthocoelous, the remaining dorsals were amphyplatyan (flat on both ends).The most obvious feature of the Amargasaurus' skeleton were the extremely tall, upwardly projecting neural spines on the neck and foremost back vertebrae. The neural spines were bifurcated along their entire length, forming a double row.

They were circular in cross section and tapered towards their tips. The tallest spines could be found on the middle part of the neck, where they reached 60 cm on the 8th cervical. On the neck, they were bowed backwards, projecting above the adjacent vertebra. Greatly elongated spines continue along the last two dorsal vertebrae, the hip and foremost tail. However, in these regions the spines were not bifurcated but flared into a paddle-shaped upper end.The skull is only incompletely preserved––however, it likely had a horselike, broad snout equipped with pencil-like teeth, based on related sauropods for which more complete skulls are known.

As in other dicraeosaurids, the external nares (nostril openings) were situated in the posterior half of the skull, diagonally above the eye sockets, which were proportionally large.

The spines may have supported a pair of tall skin sails. Similar sails are seen in the unrelated dinosaurs Spinosaurus and Ouranosaurus, as well as the pelycosaurs Dimetrodon and Edaphosaurus. There are a variety of hypotheses for the function of these such sails, including defense, communication (for mating purposes or for simple species recognition), or temperature regulation.

A 2022 study suggest that Amargasaurus could have presumably had sail like formations similiar to Ouranosaurus or Spinosaurus. 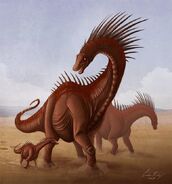 Amargasaurus in The Land Before Time series. 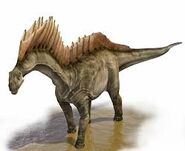