Start a Wiki
Alvarezsaurus (/ˌælvərɛzˈsɔːrəs/; "Alvarez's lizard") is a genus of small alvarezsaurid dinosaur from the Late Cretaceous period of Argentina, approximately 86 - 83 million years ago. Estimates suggest that it measured about 2 meters (6.5 ft) in length and weighed approximately 20 kg (45 lbs). It was found in the Bajo de la Carpa Formation and was named by paleontologist José Bonaparte in 1991 after the historian Don Gregorio Alvarez.

The type species is A. calvoi. It was bipedal, had a long tail, and its leg structure suggests that it was a fast runner. It may have been insectivorous and was basal to better-known members of its family, such as Mononykus and Shuvuuia. It has been alternately classified with both non-avian theropod dinosaurs and early birds. 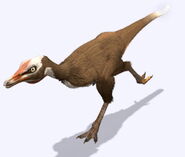 Retrieved from "https://dinopedia.fandom.com/wiki/Alvarezsaurus?oldid=149984"
Community content is available under CC-BY-SA unless otherwise noted.