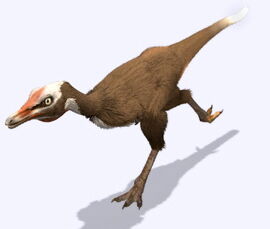 Alvarezsaurs were a group of odd looking theropods from the Cretaceous Period, known for their weird features.

Their arms are unusual in that in all genera except the most primitive, Haplocheirus, have rather short arms with 1-3 fingers and 1-3 claws for its Alvarezsaurid grouping.

Alvarezsaurids are known for their well-developed arms, and small heads. In some examples, such as Deinocheirus, which carries a similar image to the more famous Therizinosaurs.

Alvarezsaurs had beaks on their mouths. They had a lot of really small teeth. Some studies suggest that they might actually have dabbled up smaller invertebrates as well. Alvarezsaurids such as Shuvuuia might've eaten ants and attacked Termite mounds to feed on the little insects. Some might've been intelligent.