Afrovenator ( /ˌæfroʊvɨˈneɪtər/; "African hunter") is a genus of megalosaurid theropod dinosaur from the mid Jurassic Period of northern Africa. It was a bipedal predator, with a mouthful of sharp teeth and three claws on each hand. Judging from the one skeleton known, this dinosaur was approximately 9 meters long from snout to tail tip.

The remains of Afrovenator were discovered in the Tiourarén Formation of the department of Agadez in Niger. The Tiourarén was originally thought to represent the Hauterivian to Barremian stages of the early Cretaceous Period, or approximately 136 to 125 million years ago (Sereno et al. 1994). However, re-interpretation of the sediments showed that they are probably mid-Jurassic in age, dating Afrovenator to the Bathonian to Oxfordian stages, between 164 and 161 mya.The sauropod Jobaria, whose remains were first mentioned in the same paper which named Afrovenator, is also known from this formation.

Afrovenator is known from a single nearly complete skeleton, featuring most of the skull (minus the mandible, or lower jaw), parts of the spinal column, hands, and forelimbs, a nearly complete pelvis, and complete hind limbs. This skeleton is housed at the University of Chicago.

Most analyses place Afrovenator within Megalosauridae, which was formerly a "wastebasket family" which contained many large and hard-to-classify theropods, but has since been redefined in a meaningful way[1], as a sister taxon to the family Spinosauridae within the Megalosauroidea.

A 2002 analysis, focused mainly on the noasaurids, found Afrovenator to be a basal megalosaurid. However, it did not include Dubreuillosaurus (formerly Poekilopleuron valesdunesis), which could affect the results in that region of the cladogram (Carrano et al. 2002).

A few alternative hypotheses have been presented for Afrovenator's relationships.

In Sereno's original description, Afrovenator was found to be a basal spinosauroid (he uses the name "Torvosauroidea"), outside of Spinosauridae and Megalosauridae (which he calls "Torvosauridae") (Sereno et al. 1994).Finally, another recent study places Afrovenator outside of Megalosauroidea completely, and instead finds it more closely related to Allosaurus (Rauhut 2003). This is the only study to draw this conclusion.[2] 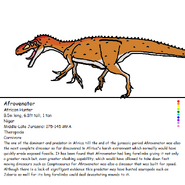 Add a photo to this gallery
Retrieved from "https://dinopedia.fandom.com/wiki/Afrovenator?oldid=142805"
Community content is available under CC-BY-SA unless otherwise noted.