Aerosteon is a genus of allosauroid Megaraptoran theropod dinosaur from the Late Cretaceous period of Argentina. Its remains were discovered in 1996 in the Anacleto Formation, dating to the Santonian stage (about 84 to 65 million years ago). The type and only known species is A. riocoloradensis. Its specific name indicates that its remains were found 1 kilometers north of the Río Colorado, in the province of Mendoza. They show evidence of a bird-like respiratory system.Aerosteon's name can be translated as air bone and derives from Greek ἀήρ (aer, "air") and οστέον (osteon, "bone").

Aerosteon was a 9 meter (30 ft) long bipedal carnivorous dinosaur that lived approximately 83 million years ago during the Santonian stage.

The remains discovered include a single tooth, some cranial bones, a number of partial or complete vertebrae from the neck, back, and sacrum, several cervical and dorsal ribs, gastralia, furcula (wishbone), left scapulocoracoid, left ilium, and left and right pubes. The incomplete fusion of some of its bones indicate that it was not quite fully mature.

Aerosteon did not initially appear to belong to any of the three groups of large theropods that were known to have inhabited the southern continents during this time (namely the Abelisauridae, Carcharodontosauridae or Spinosauridae). Paleontologist Paul Sereno suggested that it might be related to the Allosauroid radiation of the Jurassic period, and this was confirmed in subsequent studies that recognized a clade of late-surviving, lightly built, advanced allosauroids with large hand claws similar to the spinosaurs, called the Megaraptora, within the Carcharodontosaur family Neovenatoridae.

Some of Aerosteon's bones show pneumatisation (air-filled spaces), including pneumatic hollowing of the furcula and ilium, and pneumatisation of several gastralia, suggesting that it may have had a respiratory air-sac system similar to that of modern birds. These air sacs would have acted like bellows, moving air into and out of the animal's relatively inflexible lungs, instead of the lungs being expanded and contracted as occurs with mammals. See avian respiratory system for more detailed information on this.

Sereno theories that this respiratory system may have developed to assist with regulating body temperature and was later co-opted for breathing. 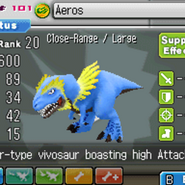 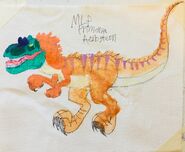 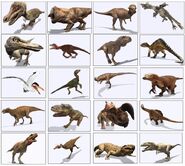 Retrieved from "https://dinopedia.fandom.com/wiki/Aerosteon?oldid=211360"
Community content is available under CC-BY-SA unless otherwise noted.