Time period: the late Miocene of Africa and Eurasia

The first bone-cracking hyena, Adcrocuta eximia, does not appear in the fossil record until the late Miocene. The skull of Adcrocuta bears a remarkably close resemblance to that of modern spotted, brown and striped hyenas. However, Adcrocuta had a very stocky build, with short, robust limbs, and it showed none of the cursorial adaptations seen in the extant bone-cracking hyenas (Werdelin & Solounias 1996), This species appears to have been highly successful as its fossil remains are found all over Eurasia and northern Africa (Werdelin & Solounias 1991). The appearance of Adcrocuta was followed by the second great hyena radiation, involving the appearance of several other hyaenid genera that were morphologically specialized for bone-cracking, including the lion-sized Pachycrocuta brevirostris. Weighing roughly 150 kg, Pacyhcrocuta was the largest hyaenid ever known. Because its muzzle was shorter than those in other hyenas, this species became commonly known as the 'short-faced hyena.' 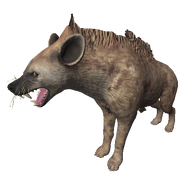 Add a photo to this gallery
Retrieved from "https://dinopedia.fandom.com/wiki/Adcrocuta?oldid=150935"
Community content is available under CC-BY-SA unless otherwise noted.