Acheroraptor is a Velociraptorine Dromaeosaurid from late Cretaceous Montana, North and South Dakota, USA. It contains a single species, Acheroraptor temertyorum. A. temertyorum is one of the two geologically youngest known species of dromaeosaurids, the other being, potentially dubious, Dakotaraptor, which is also known from Hell Creek.

Acheroraptor was first described and named by David C. Evans, Derek W. Larson and Philip J. Currie in 2013 and the type species is Acheroraptor temertyorum. The generic name is derived from the Greek Ἀχέρων, Acheron, "underworld", in reference to the provenance from the Hell Creek Formation, and the Latin raptor, "thief". The specific name honours James and Louise Temerty, the chairman of Northland Power and the ROM Board of Governors and his wife, who have supported the museum for many years.

Acheroraptor is known from the holotype ROM 63777, a complete right maxilla with several maxillary teeth (some isolated), and from a referred dentary (lower jaw) ROM 63778, both housed at the Royal Ontario Museum, Canada. Both specimens were collected approximately four metres from one another, from the same mixed faunal bonebed that occurs in the upper part of the Hell Creek Formation of Montana, dating to the latest Maastrichtian stage of the Late Cretaceous, immediately prior to the Cretaceous–Paleogene extinction event. The holotype specimen was collected on August 28, 2009 by commercial fossil hunters, one of whom also collected the dentary several years later, and who were later able to provide detailed geographic data from GPS and photographs of the specimen in situ in the ground on the day of discovery. Both specimens were subsequently purchased by the Royal Ontario Museum from a private collector.

The phylogenetic position of Acheroraptor was explored by Evans et al. (2013) using several data matrices. Both specimens of Acheroraptor were coded as a single taxon into Turner et al. (2012) data matrix, an extensive phylogenetic analysis of theropods that focuses on maniraptorans. Acheroraptor was recovered as a member of the clade containing Eudromaeosauria and Microraptorinae, confirming its referral to the Dromaeosauridae, and possibly to Eudromaeosauria. Within that clade, however, most taxa were recovered in a large polytomy, due to the limited codings available for Acheroraptor.

Evans et al. (2013) also coded the specimens of Acheroraptor (together and separately) into an updated version of the smaller, dromaeosaur-specific dataset from Longrich and Currie (2009). Velociraptor osmolskae and Balaur bondoc were added, Itemirus was excluded (following its identification as a tyrannosauroid by Miyashita and Currie (2009)), and following Turner et al. (2012) the codings for Adasaurus mongoliensis were separated into these based on the holotype from the Nemegt Formation, and these based on IGN 100/23 from the Bayanshiree Formation. Several characters were also rescored and modified, and two maxillary characters were added to the matrix from Turner et al. (2012). This analysis yielded a more resolved topology, placing Acheroraptor in a relatively basal position within the Velociraptorinae, which was otherwise found to include only Asian dromaeosaurids. The cladogram below shows the phylogenetic position of Acheroraptor following this analysis.

Evans et al. found that Acheroraptor was the only dromaeosaurid from the Hell Creek Formation. Common teeth previously referred to Dromaeosaurus and Saurornitholestes would then be considered Acheroraptor. Evans et al. also concluded that there was probably only one dromaeosaurid in the Hell Creek-Lance assemblage. In 2015, this view was disproven, with the description of Dakotaraptor, a far larger second dromaeosaur from the formation. Other non-dromaeosaurid theropods from the formation are tyrannosaurids, ornithomimids, troodontids, birds, and caenagnathids. The tyrannosaurids from the formation are Nanotyrannus and Tyrannosaurus, although the former might be a junior synonym of the latter. Among ornithomimids are the genera Struthiomimus as well as Ornithomimus, and "Orcomimus". The birds known from the formation are Avisaurus, Brodavis baileyi, and two unnamed hesperornithoforms. Only three oviraptorosaurs are from the Hell Creek Formation, Anzu, Leptorhynchos, and third and undescribed specimen, very similar to Gigantoraptor, from South Dakota. However, only fossilized foot prints were discovered as of 2016. The known troodontids from this formation include Troodon, Pectinodon, and Paronychodon. A single species of coelurosaur is known from similar fossil formations includes Richardoestesia. 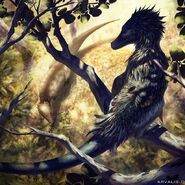 Acheroraptor at the very bottom & as seen in Discovery Channel’s “Valley of the T.Rex”.

Add a photo to this gallery
Retrieved from "https://dinopedia.fandom.com/wiki/Acheroraptor?oldid=199984"
Community content is available under CC-BY-SA unless otherwise noted.